Learn everything you need to know about PFC is 15 minutes or less!

Learn everything you need to know about PFC is 15 minutes or less!

1. What is the problem with electricity in Southern Africa?

Every year in Southern Africa 100’s of Millions of kw’s of electricity (almost $5 billion dollars in value) is lost and wasted.

If you own or operate a business in Southern Africa, you are the one paying for these ever increasing losses.

In other countries like the UK and Northern Europe the electricity infrastructure has received continual investment and development.

But in Africa the electricity infrastructure is outdated, poorly maintained and leaking like a bucket full of holes.

Across Southern Africa 100’s of Millions of kw’s (billions of dollars in value) are lost every year. This waste of electricity is called a Reactive Loss – we also call it Power Factor.

ZESCO conducted their own Power Factor surveys since 1995. And according to their report “80 percent of the clients surveyed operate at a Power Factor of 0.5 to 0.8” – meaning 8 out of 10 companies in Zambia are losing somewhere between 20% and 50% of all the electricity they purchase.

Companies like yours pay for this electricity (it passes the meter), but then it is lost.

Our own detailed measurements (carried out in Zambia, South Africa, Zimbabwe and Kenya) show an average Reactive Loss of 22%.

Some of the companies we helped were losing 40% of all the electricity they buy.

2. Is the problem getting better or worse?

Still no proper investment in infrastructure – Southern Africa continues to lose billions of dollars worth of electricity every year.

Instead of solving the problem at source, power companies respond with price increases, fines and penalties.

For some companies cost increases will be the difference between profit and loss. Survival or failure.

Using PFC equipment to control and minimise your costs is now more important, and more valuable than it’s ever been.

3. Is there a solution to this problem?

In the longer term, wide-scale infrastructure investment is the solution.

But for now the only solution that can help you to reduce costs and save money is Power Factor Correction (PFC) Equipment.

The video below shows our power factor equipment in operation on a 3 PHASE electricity supply in Zambia.

Before the OPP unit is switched on, you see the L3 measurement drops as low as 0.73 in places, meaning that 27% of supply was being lost on that phase.

Remember it makes no difference whether the energy escapes, or you use it to work your machines. Either way, you have to pay.

When the PFC unit is switched on (around the 12 second mark) it immediately begins to correct the supply. It takes about 10 seconds to make the necessary adjustments (correcting to Pf 0.99/1.00) meaning 99-100% of the supply is now being utilised. Almost zero wastage.

In this particular case, monthly electricity expenses were reduced by 18% and reactive penalties/fines were also completely eliminated from all future bills.

Instead of your electricity becoming reactive/being wasted, PFC equipment uses capacitors to store the excess energy for you.

You can think of capacitors like batteries that store power. But these are special batteries that charge very quickly. They absorb and store the excess power and then release it back into the system at the rate your machines need it. This way nothing is ever wasted again.

Another way to picture this is like an over-spill tank for water. So instead of your water/electricity overflowing and being wasted, the over-spill tank stores the water so it can be used later. This is what our Power Factor Correction Equipment will do with your electricity supply. 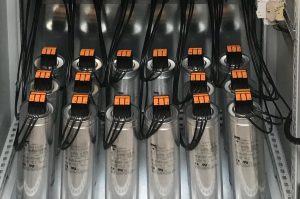 5. What difference will PFC make to my business?

1. The savings you will make

*Key Benefits for your business may exceed the stated figures, subject to site survey, data logging and technical report.

3. Reduce damage to your equipment and plant 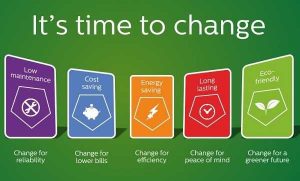 Our energy saving equipment has a typical pay-back time of 12 months. And it’s so good that every unit we supply comes with a Full 5 Year Guarantee.

Yes we can. OPP Power Factor Correction Equipment is the only technology available anywhere that works with diesel generators.

Our units produce minimum diesel fuel savings of 10%, some of our units have recorded savings of almost 30%.

The video below shows one of our units in operation.

When the Power Factor Correction unit is turned off (after 10 seconds), the load on the generator increases by around 22%. Which means that if they didn’t have this unit that generator would increase its fuel consumption by 22%.

Calculate 22% off your own monthly diesel fuel bill – that’s the type of savings you’ll make with OPP.

8. Can OPP help to remove Reactive Charge Fines and Penalties from my electricity bills?

OPP Power Factor Correction targets power factor Pf 0.95 or better, which in most cases will remove reactive power charges and penalties from all your future electricity bills.

Reactive fines and penalties are already being imposed in Kenya and Zimbabwe. Any day now companies in Zambia and South Africa will also face the same fines/penalties/further costs increases.

Below you see a Zesco Bill with Reactive Penalty Charges included. 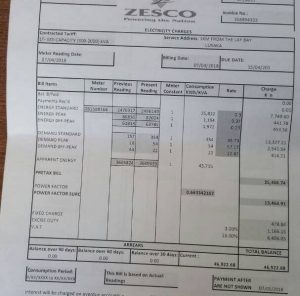 9. What is the Typical Payback Period for an investment in Power Factor Correction?

The pay-back period for OPP power factor correction systems may shock you.

Our units pay for themselves (the savings they make) in months. Sometimes it’s even less than that.

To estimate your savings and the pay-back on your investment in Optimised Power Products PFC equipment, visit this page and use our PFC Calculators.

10. What do I need to think about when choosing my PFC supplier?

You need to think about the African climate and topography.

And you need to make sure that your PFC equipment is able to withstand the demands of extreme heat and high altitude.

11. What do customers say about OPP?

“We used to exhaust our 600 litres diesel fuel tank in 12-13 hours of continuous use. But since the installation of power factor correction from Optimised Power Products, the same tank of diesel now lasts 17 hours. This represents a saving of around 30%.”

“We have been using the Optimised Power Products PFC Unit and are very impressed by the results. We have realised a significant saving on our electricity bill, we use less Solar and our Generators are using about 10% less fuel. We now also run more machinery on the same Transformer since the PFC unit has freed up additional power.”

“Since installation of OPP power factor correction the unit has given us great savings on our electricity bills. We are also very pleased with the service we received and are currently in the process of ordering further units for our other stores. It was very reassuring to be given a full 5 year warranty which no other company could offer us.”

MONEY IS HARD ENOUGH TO COME BY, TIME TO STOP BURNING IT
CONTACT US TODAY FOR HELP AND ADVICE
CONTACT OPP
Back To Top